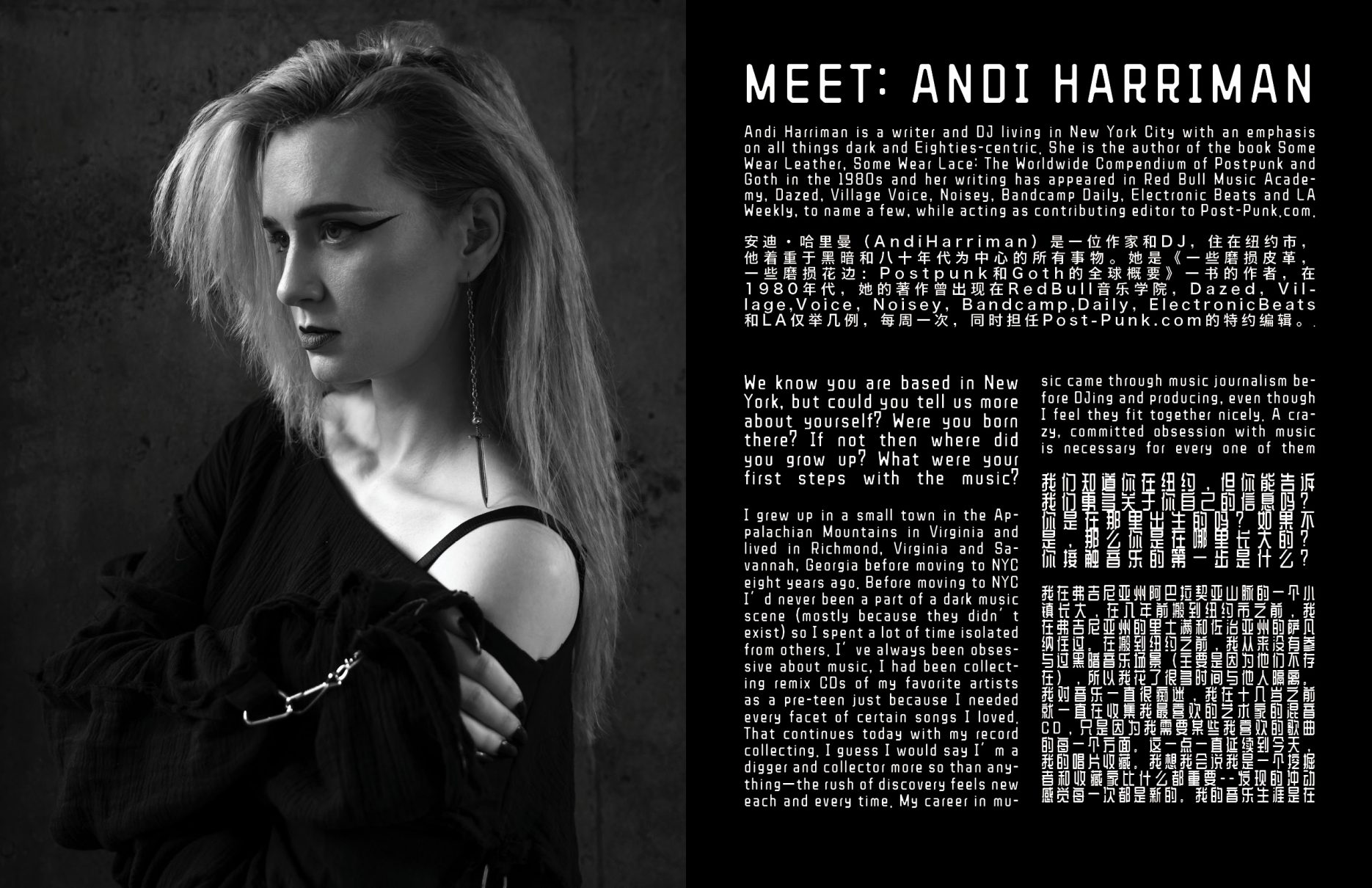 Andi Harriman is a writer and DJ living in New York City with an emphasis on all things dark and Eighties-centric. She is the author of the book Some Wear Leather, Some Wear Lace: The Worldwide Compendium of Postpunk and Goth in the 1980s and her writing has appeared in Red Bull Music Academy, Dazed, Village Voice, Noisey, Bandcamp Daily, Electronic Beats and LA Weekly, to name a few, while acting as contributing editor to Post-Punk.com.

We know you are based in New York, but could you tell us more about yourself? Were you born there? If not then where did you grow up? What were your first steps with the music?

I grew up in a small town in the Appalachian Mountains in Virginia and lived in Richmond, Virginia and Savannah, Georgia before moving to NYC eight years ago. Before moving to NYC I’d never been a part of a dark music scene (mostly because they didn’t exist) so I spent a lot of time isolated from others. I’ve always been obsessive about music, I had been collecting remix CDs of my favorite artists as a pre-teen just because I needed every facet of certain songs I loved. That continues today with my record collecting. I guess I would say I’m a digger and collector more so than anything—the rush of discovery feels new each and every time. My career in music came through music journalism before DJing and producing, even though I feel they fit together nicely. A crazy, committed obsession with music is necessary for every one of them

Recent release on A+W. Tell us about the process about it. How long did you work on it? What was the trigger to start and was it primary intended to be released on A+W or the idea came later on?

I had been producing a bit before the a+w release and had put out two of my own tracks on SYNTHICIDE compilations. Afterwards, I thought the next natural step was to make an EP. The trigger to produce Corpse to Corpus was because of the blatant misogyny that was apparent in the scene. The EP is my reaction to the glaring problems within dance music culture as well as my own experiences of it. But yes, I made the tracks with that label in mind, knowing they are the prominent label in the scene (and my personal favorite).

It took about 2 years to complete – which feels like a long time – but I wanted it to be perfect.

What is your favourite equipment / setup if it comes to music production? Where do you prefer to produce?

I like working with a minimal setup and I believe that it’s not necessary to have a lot of gear in order to make a great sounding record. Currently, I have two rack module synths, a Kawai R-50 drum machine, and an insanely heavy mixer from the 1970s that has a nice spring and noise to it. I think my favorite is definitely the drum machine since it’s got all the classic Wax Trax! sounds I’m obsessed with. All my hardware is vintage and my DAW is Ableton. Since I don’t own much, everything is on a fold out table in the corner of my bedroom—glamorous, I know.

Have you ever been to Asia? If yes, tell us about your experience. If no, how do you imagine your stay and where if you would go? Any Favourite place to DJ ?

Any city which inspire you?

No I haven’t, unfortunately! I would certainly love to go there. I love traveling and meeting new people while discovering new cultures, that’s the best part about touring.

“Some Wear Leather, Some Wear Lace: The Worldwide Compendium of Post-punk and Goth in the 1980s” was a great read for us with amazing images giving the bigger picture about the movement. Do you remember how your interest started about it? What was your trigger to dig deeper into this subject? Do you consider yourself as part of it – if yes, tell us more about it, your beginning in it.

The gateway band was Depeche Mode—I think it is for a lot of people who are now in the goth scene. Their music is a perfect blend of melancholy and hope, which is something I’ve related to my entire life. At my first Depeche Mode concert everyone was wearing black! I’d never seen that before and immediately felt at home. That, and I saw Robert Smith of the Cure wearing lipstick and I immediately fell in love. Like I mentioned, I tend to obsess over music and, while I was doing research further into 1980s goth subcultures, I realized that there were no books that were specifically dedicated to that decade of goth. So, while I was in graduate school, I began writing the book I wanted to see. And yes, I would say I am deeply immersed in the goth scene here in NYC and

Before the COVID break out you were touring in Europe many times. What is your favourite party/parties to DJ and why?? How would you compare scene in New York city to Berlin or other European cities ?

I love, love DJing Eastern European cities because of the unique experience and hope to do more of that once we can all be together again. But some parties that stand out to me is Wraith in London because of the full-on creativity and energy of its club-goers—this party feels like the future. Secondly, Drøne in Manchester was incredible because it was set in a dilapidated garage with so much fog you couldn’t see a foot in front of you. It’s also curated incredibly well. I also love DJing yearly at the goth festival, Wave Gotik Treffen, in Leipzig with the a+w family. The scenes are very different. Here in NYC and the US, I don’t get booked often for techno parties. What I DJ is often separated from the traditional club scene—I usually get booked for industrial, 80s, or goth parties. In Europe, however, I think the type of music I play and produce fits in more with club culture. I think the US is catching up in terms of catering to darker electronic music but we’re ot quite there yet.

Do you believe everything will come back to normal or do you consider there will be lot of changes in the music industry due to the pandemic?

There’s no way everything can be back to what we considered “normal.” Venues—many of our workplaces, places of safety and comfort—have disappeared. And if they haven’t yet, they’re in dire need of support in order to stay open. I think the loss of clubs and venues will take a toll on the very core of the dance music scene but I also think that people will be excited and supportive when it comes to events in the future.

How your story with “Synthicide” started? The party was always hold in Bossa Nova Civic Club? Who were your favourite guests you still remember them how they performed ?

SYNTHICIDE began as a Sunday happy hour goth, industrial, and dark 80s party. I had been unhappy with how divided the scenes were in NYC and the way rules were attached in regards to dress and hierarchy. I created SYNTHICIDE as a safe space for anyone to attend and dance without judgement. It did start at Bossa Nova Civic Club but eventually it grew to other venues, as well as other cities, including Berlin. It’s no longer a goth party, per se, but retains the dark spirit of the subculture and a lot of goths attend. I love the mix of people that come to SYNTHICIDE events. My favorite party at Bossa was when Silent Servant played the 3 year anniversary. It was the turning point for SYNTHICIDE—it felt like the party could now be considered as a serious staple in the NYC scene. In 2019, we had Daniel Miller of Mute / The Normal DJ, which was a surreal moment I never thought

would happen. Another milestone was one of SYNTHICIDE’s very first live events with Schwefelgelb at Saint Vitus Bar, a place that is now an important part of the SYNTHICIDE story. But I believe the most fun I’ve ever had at an event was when Light Asylum played live to a sold out audience in the basement at the now-shuttered Brooklyn Bazaar. It was so raw and powerful: Shannon Funchess owned the crowd. It was one of the most amazing and punk performances I’ve ever seen.

As we know you are also a writer for such a great platform post-punk.com , how did you start your journey with them ?

After my book came out, it seemed like the next logical place for me to write and get my footing in the music journalism world. I’ve written for many other publications since such as Dazed, Bandcamp Daily, Red Bull Music Academy, Numero Berlin, and Noisey (to name a few), but grateful to post-punk.com for giving me that initial opportunity.

How do you see goth culture in Asia compare to it’s origin?

There are some amazing 80s post-punk bands in Japan (Madame Edwarda!) and, of course, are visually stunning! I think that Asia has a unique fashion outlook on the subculture and a commitment to it that is unparalleled.

What was your weirdest show you have ever experienced or you were part of it?

Link to print copy US: 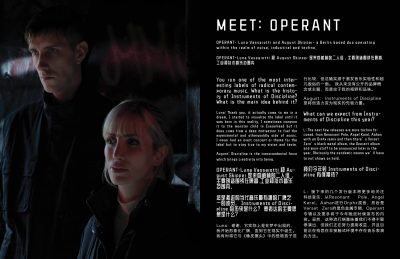 NEWS:Robert Yang’s newest label, Piece of Work, is onto its second release from 羅伯特 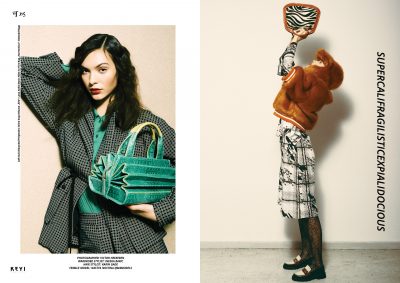 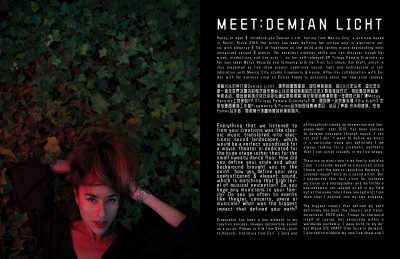